It is often for many people in IT, myself included, to confuse the terms virtualization and abstraction. When I searched for “virtualization vs abstraction” on Google, every article I found explained the difference between them in a way that was .. cloudy! So…. What IS the REAL difference?

Origins of the Word “Virtual” 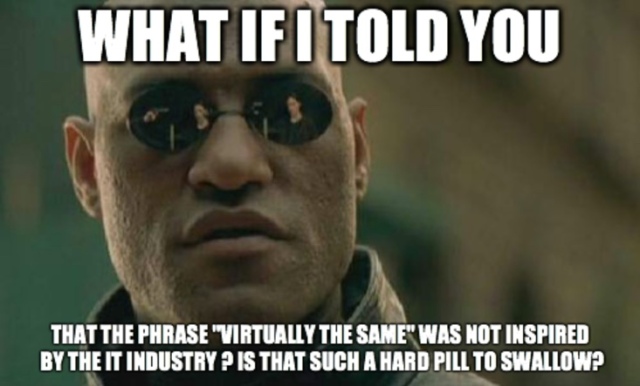 “Virtualization” is the process of making a representation of something “virtual”. According to http://www.merriam-webster.com/dictionary/virtual, virtual means

The word “virtual” has been present in English since 1400-1500. The origin of “virtual” is the Medieval Latin word for “virtues” (or specifically, “virtuālis,”). A “Virtue” is defined as “a beneficial quality or power of a thing.” Over time, this evolved to being “important qualities” , or simply “identifying properties”.

“virtual” has been used for centuries in politics (230 years ago in Alexander Hamilton’s Federalist Papers) and continues to be used today for simple product comparisons (“The fake [ purse ] is virtually identical to the original of the same make by the authentic Louis Vuitton factories.”).

Today, that same definition of “virtual” from the Wester dictionary also includes “existing or occurring on computers or on the Internet”.

If today a person uses Google image search using only the keyword “virtual”, what would one see? 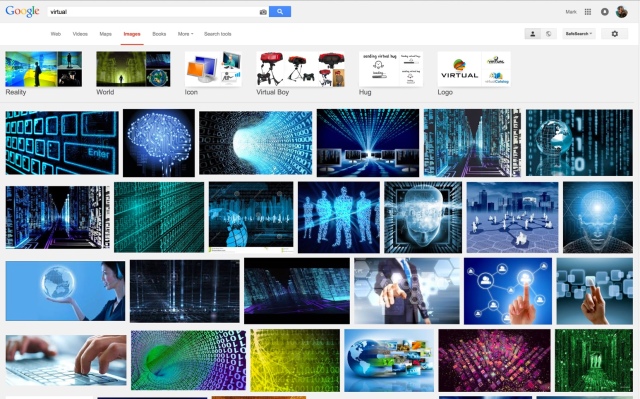 IT has taken cultural ownership of the word “virtual”, and this started with the introduction of Virtual memory some 50 years ago.

The concept of Virtual Memory First described in the 1956, and first implemented in the 1960s. (See https://en.wikipedia.org/wiki/Virtual_memory) 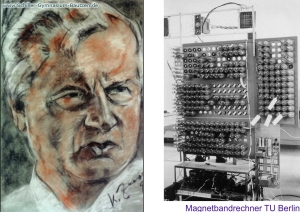 Interesting that “virtual memory” was not the term used at first, and it isn’t clear exactly when the term “virtual memory” was adopted. One theory is that automated paging performance was nearly (virtually) identical to what a programmer could attain with manual paging. What is known is that the concept of virtual memory continued to evolve and was ultimately adopted in varying degrees on all hardware platforms.

Virtualization has simplified many things, has generally improved hardware utilization efficiency, and is indeed indispensable (unless you actually enjoyed manual paging, or bare-metal Windows restores). For many years it has been the brick on the gas pedal of our industry. However, it has created an equal and sometimes even increased level of complexity elsewhere. 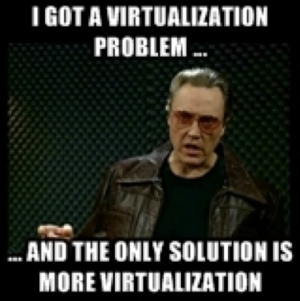 And then one day it dawned on me – Virtualization was a means to an end, but not an end onto itself.

When you look at the following piece of abstract art, what do you see ? I ask, because many suggest “abstraction” is just about “generalizing”. Are you generalizing this artwork into a bucket of “random shapes and colors”, or are you recognizing patterns and creating a deeper response to it ?

The use of “abstraction” in IT has merited special recognition in the Webster dictionary (See http://dictionary.reference.com/browse/abstract?s=t):

In software development, an “abstract class” (shown below) is typically defined as a “generalization”. In this example, a “dog” is a generalization (or common category) of several dog breeds. But why do we do this ? 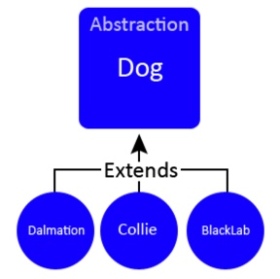 The motivation of abstraction is, first, to be able to perform recognition and categorization. Recognition is performed for the purposes of associating the proper set of rules on how to interface with, in this case, a dog.

You are abstracting as you read this this article. If you couldn’t visually process the lines and curves and colors on the screen in front you, and recognize letters from those abstractions, you wouldn’t be able to read this article at all. Abstraction is a fundamental human ability that allows all of us to recognize things and interface with the world

Recognition is defined as (See http://www.cns.nyu.edu/~david/courses/perception/lecturenotes/recognition/recognition.html.) :

Consider the image below: Despite many pictures of a duck at different sizes, angles, and with different methods (photographs or sketches), the human mind abstracts key aspects and identifies (recognizes) that each image is a duck. 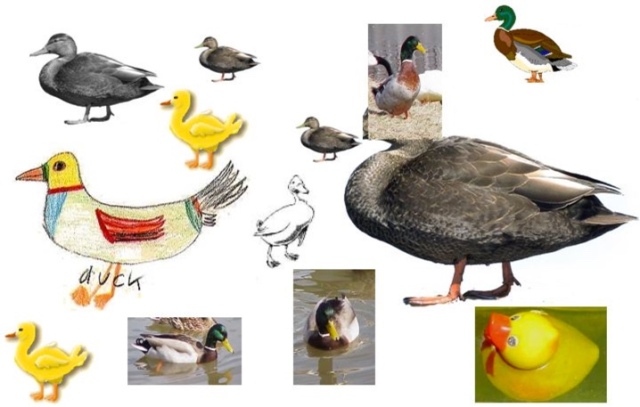 You know who else can recognize ducks? Alex Rodriguez.

The universe is made up of energy and elements and all kinds of other things that smart physicists understand. There is no raw element called a “baseball”. A baseball is a collection of many different types of elements.. and billions of atoms, assembled together in different sub-objects (each of which is actually an abstraction onto itself) which are then packaged together into bigger objects, and ultimately into a thing that A-Rod (and the rest of us) recognize as a baseball.

Here is what is inside a baseball (see http://www.madehow.com/Volume-1/Baseball.html) : 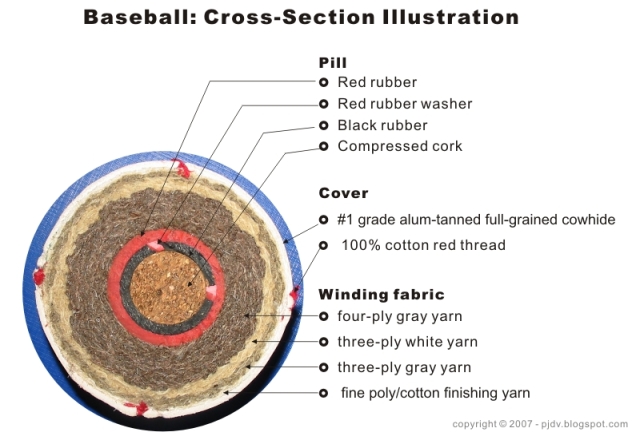 But what a human sees, when presented with a baseball, is:

The human mind, and in particular the mind of Alex Rodriguez, does not map a scientific explanation of the billions of atoms of a baseball and then categorize it as a baseball. Instead, a few key observations are made, and abstraction and recognition are used to identify the object as a baseball.

With the abstraction of that object created, and the object recognized, A-Rod’s mind then understands what he can do with that recognized abstraction – He can pick it up. he can hold it. He can throw it. He can catch it. He can buy and sell it. The actions that are supported by that abstraction is it’s interface. But his favorite action to take on a baseball?

A-Rod thinks “I recognize a baseball… I interface with hitting a home run.”

Abstraction is fundamental to the art of creating new things; these new things are constructed from an assembly of smaller things. Abstraction is also about establishing a set of rules that allows repeated recognition of that logical thing in different circumstances, and rules which can be shares with others so that they too will recognize this thing. Lastly, it is about supporting the object recognition to allow association with a set of rules which can be used to interact with this new thing, which is called the interface.

We circle back to a discussion of IT. Modules of codes, whole software programs, or even entire hardware systems, can provide an abstraction – creating something new that has a particular interface that allows that new thing to be used. This could be as simple as a POSIX interface, a document editor, a social media tool, even a number-crunching supercomputer. A great description can be found in these SJSU Computer Science notes at http://www.cs.sjsu.edu/faculty/pearce/oose/metrics/metrics.htm :

The key to the Abstraction Principle is the independence of implementation (modularity) it creates.

Consider the automobile. It is an abstraction that is created out of thousands of individual parts – which function as a whole new entity with a unique reusable interface. Most don’t care about how the car is constructed (implemented). Yet when assembled, we can all recognize this as a car.

First we listen to Abe, a man from the future, share his perspectives on this subject…

Unfortunately, even though that may be mostly right, it is misleading because very few things are absolutely either one or the other. That is why the above statement includes the qualifier “true”.

Things are Seldom Either Pure Abstractions or Virtualizations

Consider the humble x86 virtual machine. Given what has been presented thus far in this article, is this a virtualization, or an abstraction?

While called a virtual machine, a VM is also an abstraction of sorts, since it has several improved characteristics versus a physical server. Consider a VMware virtual machine also offers :

This is all really freaking confusing, since virtual machines from a company called VirtualMachineWare are not exactly 100% virtualization. Which, coming full circle, proves it may actually not be a contradiction to describe a VM as an abstraction (an act I must admit Ive ridiculed in the past).

A relevant and enlightening subject to discuss at this juncture are VMware vVols (Virtual Volumes), and in particular the Storage Policy-Based Management (SPBM). I’m big on policy management, and QoS. These are real service abstractions, and abstraction is really hard to do right. It is also a bit of a tough sell, as service guarantees tend to (rightfully so) negatively impact efficiencies.

Chuck Hollis (of VMware) sees the benefits of policies, and I couldn’t agree more. (See http://chucksblog.emc.com/chucks_blog/2014/07/policy-based-it-the-next-frontier.html)

In the image below, consider all the traditional complexity involved in requesting for a storage service level be met from the perspective of the application (owner) in a virtual environment. (See VMware blog post “Storage Directions for the Software-Defined Datacenter” : http://blogs.vmware.com/cto/storage-directions-for-the-software-defined-datacenter/)

But with SPBM, all of the complexity over understanding media types can be removed from the application level. It offers significantly more implementation independence. The value was clear immediately, and it is no wonder why NetApp jumped at the opportunity to fully support vVols before any other storage vendor (See http://community.netapp.com/t5/Tech-OnTap-Articles/NetApp-Unlocks-the-Power-of-VMware-VVOLs/ta-p/86939 ) 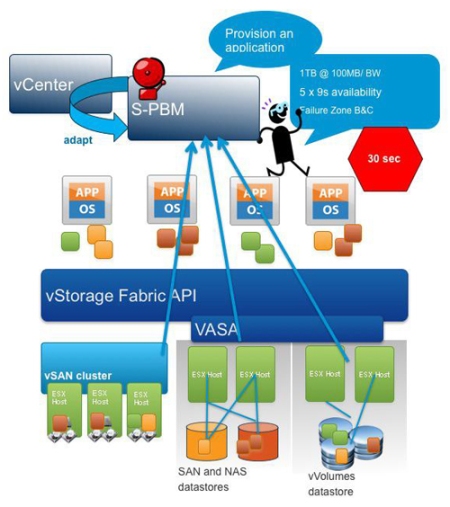 Cloud is about ABSTRACTION

We all know the cynicism regarding “the cloud”. You have no doubt seen this sticker :

But the Cloud is more than just virtualization… and your stuff on someone else’s computer. See this article from 2009: http://www.strategi.com/blog/abstraction-the-key-understanding-cloud-computing/

The Real Cloud Disruption is new abstractions, and cleaner interfaces that speak the language of IT consumers in the context of their immediate business challenges. Don’t take my word for it – The IDC has been onto this trend for several years (described as the Third Platform): 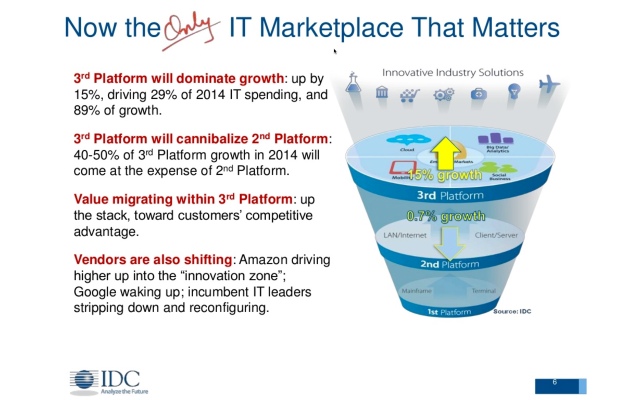 Writing this article was a journey for me – I must have re-written it no less than 10 times as during the investigation and proof points, I realized how wrong I myself was. You are encouraged to do the same with your own thoughts – sit down, write out those nagging thoughts, and then cross-examine them with an open mind.

There are a lot of great virtualization tools out there that are adding far more value than just copying something else. It is OK if you confuse the words “virtualization” and “abstraction”, because in many cases (in particular within the infrastructure) most elements involve aspects of both. But attention to detail on using them will make you stand out.

It is a great time to be in IT. All the best, and thanks for reading!